Presentation slides are here from lenr-canr.org.

A description of the visit was published by Infinite Energy Magazine.

The Norwegian Academy of Technological Sciences (NTVA) and The Norwegian Society of Graduate Technical and Scientific Professionals (Tekna) sponsored the event as part of a one-day seminar Can LENR provide cheap and clean energy? drawing a capacity-crowd of around 60 people. 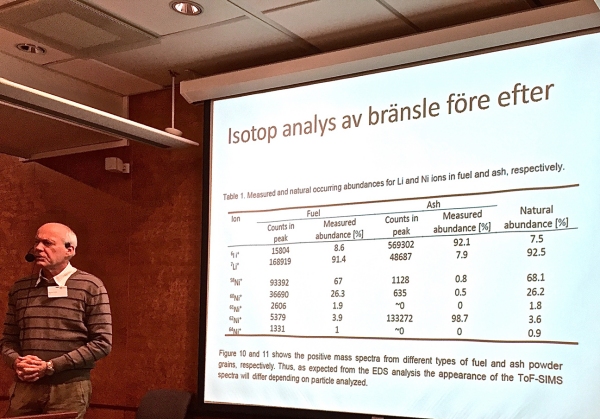 Hanno Essen, the past Chair of the Swedish Skeptics Society, recently released a report describing tests made of the E-Cat reactor, and spoke about “the various Rossi replications”.

Sten Bergman represented the energy industry perspective on LENR and Øystein Noreng spoke on “economic and other challenges of bringing any kind of LENR technology to the marketplace.”

McKubre also gave “the up-to-date status of Brillouin Energy’s latest technical progress”. SRI has been working with Brillouin Energy Corp. on the testing and design of an evolving energy cell. The design’s on-demand control of the reaction needs only a higher thermal output to be commercially viable.

McKubre lists Blacklight Power, Francesco Piantelli, Andrea Rossi, Defkalion, and Brillouin Energy Corporation all as working towards a commercial product using “small dimension nickel” and light-hydrogen. As small start-ups try to piece together a product, smart communities are preparing for a world without fossil fuels. McKubre writes that the seminar was called for to help Scandinavians educate themselves and plan for a future after the rich, local oil and gas resources run out.

“The object was to inform the possibility that Martin Fleischmann was right (and, by implication, Randy Mills, Mel Miles, Francesco Piantelli, Les Case, Yoshio Arata, Andrea Rossi, Tadahiko Mizuno, Defkalion, Brillouin and a host of others afterwards),” writes McKubre.

McKubre writes, “I believe what my hosts would like to see is at least one active, productive research project established in a Nordic country (Norway, Sweden, Finland, Denmark) that would allow this community to “pay to play” in the LENR/CMNS world and thus be prepared for any sudden advances. A secondary purpose would be to train young people to be the next leaders of any ensuing technology.”

“This is a reasonable and rational approach that I certainly support. Let me say that more strongly. Any major country or company that does not engage now, or soon, runs a serious risk of missing the start of the revolution and being trampled.”

“That is not to say that I know that LENR will contribute significantly to primary power generation in any form in the near future, or that I know how.

But having studied the field closely now for more than 25 years (more than 35 years if you count our earlier studies of the Pd-D system for other reasons), nothing I know stands as significant impediment to this achievement…

… and the hoped-for goal of the “good guys” appears to be rapidly approaching. For a long time now corporations have been “lining up to be second” — afraid of the stigma, afraid to be left behind, but with insufficient courage to go first.[2]”

“With this in mind the Norwegian strategy of “hedging” seems to be entirely appropriate with no risk attached and very little cost associated. In the worst case young people can be trained in relevant disciplines of physical sciences and physics that will have high value in a wide range of applications and implementations. In the best case Norway, Sweden and whichever Nordic country chooses to be involved can position themselves to be at or near the front of the coming wave.”